In 1937, when many thicknesses of whitewash were removed from the walls of the nave, important medieval paintings were revealed. They were fully uncovered and treated under the skilled direction of Professor E W Tristram, of the Victoria and Albert Museum, and their full significance expounded.

The subject is the legend of St Christopher, than which there was no more popular subject for a wall-painting in medieval England. In more than 400 of our ancient parish churches a representation of the saint is still to be found, while the existence of many more examples which have now perished have from time to time been recorded. 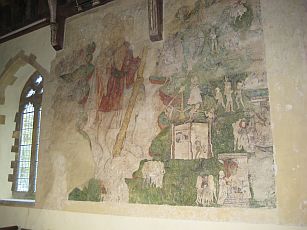 In order properly to appreciate the painting at Hemblington a short summary of the legend is necessary.

Reprobus, which was Christopher’s original name, was a huge heathen giant whose one wish was to serve the strongest man in the world.

He entered the service of the King of Cana, but noticing one day that the king used the sign of the Cross to protect himself against the power of the devil, Reprobus forsook him and took service with the fiend.

But after a time, when he saw his new master making a long detour in order to avoid passing a wayside cross, and learning that the cross was the symbol of Christ, he realised that Christ must consequently be mightier than the devil, and once again transferred his service.

Consulting a holy hermit as to the best way he could use his immense strength in the service of Christ, he was advised that he could most effectively do this by undertaking to carry passengers safely across a certain very dangerous river.

Then comes the incident of the Christ-child, and the conversion and re-naming of the giant.

But there is a sequel to the legend and very skillfully the painter at Hemblington has seized upon it to render his picture complete.

In the centre is the great figure of the giant supported by his staff, and carrying the Christ-child on his right shoulder. He is wearing a red tunic with a green belt, and he has a chaplet of beads slung round his neck. He is represented as crossing a rushing stream which runs between two steep banks. The artist has conceived of this stream as the turning point of Christopher’s life, and on the two banks he has painted a series of scenes which show, on the one side the story of the saints’ life before, and on the other side his life after his conversion.

Unfortunately those shown on the left bank have for the most part disappeared, and only two remain.

The first, at the top, represents Reprobus, as he then was, in the service of the King of Cana, but of this scene all that now remains is part of a building and some figures.

Below this we see him seeking the devil as his master. On the left are two devils riding on horses, and before them stands Reprobus, to whom they are talking. The remaining episodes on this side have perished.

But on the right hand bank there are ten episodes, all of which are quite distinguishable.

According to the legend, as soon as the river had been crossed, Christ told Reprobus (now Christopher, for he had borne Christ on his shoulder) to plant his staff in the ground. He did so, and in the morning found that it had taken root and had flowered.

He then made his way to Lydia, and by means of the miracle of his staff made 8,000 converts to Christianity. This came to the ears of the heathen King Dagarus who ordered Christopher to sacrifice to the gods. This he refused to do, and the King threw him into prison.

It is at this point that the episodes on the right hand bank begin.

Starting from the bottom and working upwards, we have:

The above is a summary of the notes which Professor Tristram made in 1937.

He adds to his description: “There are but two other examples in this country in which these scenes are so represented, namely at St Keverne in Cornwall, where eight incidents are shown, four on each side, and at Shorwell in the Isle of Wight, where five scenes are depicted. The former paintings are somewhat indistinct and the subjects are difficult to decipher, but the latter are in a better state of preservation. The Hemblington paintings are also better preserved and have more incidents in the life of the saint, and can thus take priority as the important example of this particular scheme.”

Our sister church at Blofield

Our sister church at North Burlingham